Our philosophy for mascots is simple; they must be a complete character with a strong personality and a story.

Tribus345 specialise in creating mascots for organisations. After the enormous success of the team’s first mascot, Borobi, during GC2018 they have gone on to deliver Wally The Wallaby for Rugby Australia and Lorri The Lorikeet for the 2019 INAS Global Games in Brisbane.

Our philosophy for mascots is simple; It is absolutely crucial that a mascot is not just a person in a onesie, they must be a character with a strong personality and a story. As part of giving the mascot personality, we create a back story for the character that resonates with the organisation represented and embodies their values and attributes. The process of creating the back story is one of the most important aspects of mascot creation.

The popularity of the superhero movie franchises at the moment shows how much the public appreciates knowing the story of a character, it helps them connect, and that is vitally important when the mascot is used as a communication ambassador for organisations.

The team works closely with their clients to get a total understanding of the organisation’s history, values, messaging, and future aspirations. From this research, a direction is taken on what personality style will best reflect these factors and the story begins. Once the personality and story has been crafted, we work with the traits, values and attributes to bring the character to life visually.

Social media and the internet play a very important part in telling the mascot story and giving the character life in the digital world. The tone of voice for a character shines through in social media and for many organisations the mascot’s digital presence is instrumental in connecting with a younger generation.

We always say that mascots might not be able to talk, but they have a very powerful voice. The mascots we create become an essential part of an organisation’s communication strategy. They can interact with the public in a much more personal and effective way than other corporate spokespeople or ambassadors. Tribus345 works closely with the client to create a strategy for launching the mascot, social media presence, branding, artwork and organises training for the performers and the chaperones. 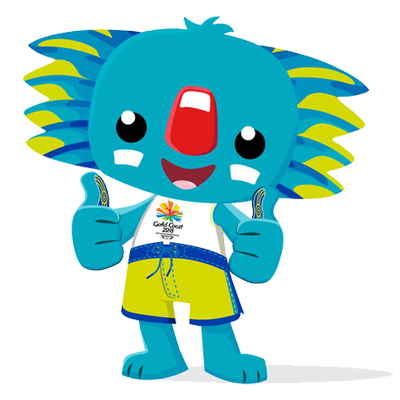 During the Gold Coast 2018 Commonwealth Games, you would have had to be living under a rock to not know who Borobi was. From the moment he jumped out of a helicopter high above Burleigh Beach on April 4, 2016, the surfing blue koala became one of the best-known ambassadors for the international event and attended more than 1700 appearances, including meeting the Queen at Buckingham Palace.

The combination of Borobi’s unique appearance and lovable backstory was instrumental in the popularity of the mascot. From children to adults, Government ministers to elite athletes and corporate partners to volunteers, Borobi connected with them all and became an invaluable marketing and communication tool for GOLDOC (the GC2018 organising committee).

Tribus345 Directors, Ken, Bill and Tracy were the team behind the Unstoppable Blue Koala. From the initial design and backstory through to marketing strategy and social media direction, the trio led the entire Borobi project.

Borobi’s success was also measured in commercial terms with more than 100,000 plush toys and over 1 million items of merchandise were sold featuring the little blue Koala, making him the most successful Commonwealth Games mascot in the movement’s history. His presence on Social Media helped GC2018 achieve more than 1.5 million followers.

“Borobi was one of the big success stories of GC2018. He was used to sell our event, engage with the public and the media and the sponsor family loved him. It was incredible how popular he and all his merchandise were, he became one of the most recognisable images of GC2018 and was an important commercial and brand asset for us.”
Cameron Murray GC2018 General Manager, Commercial. 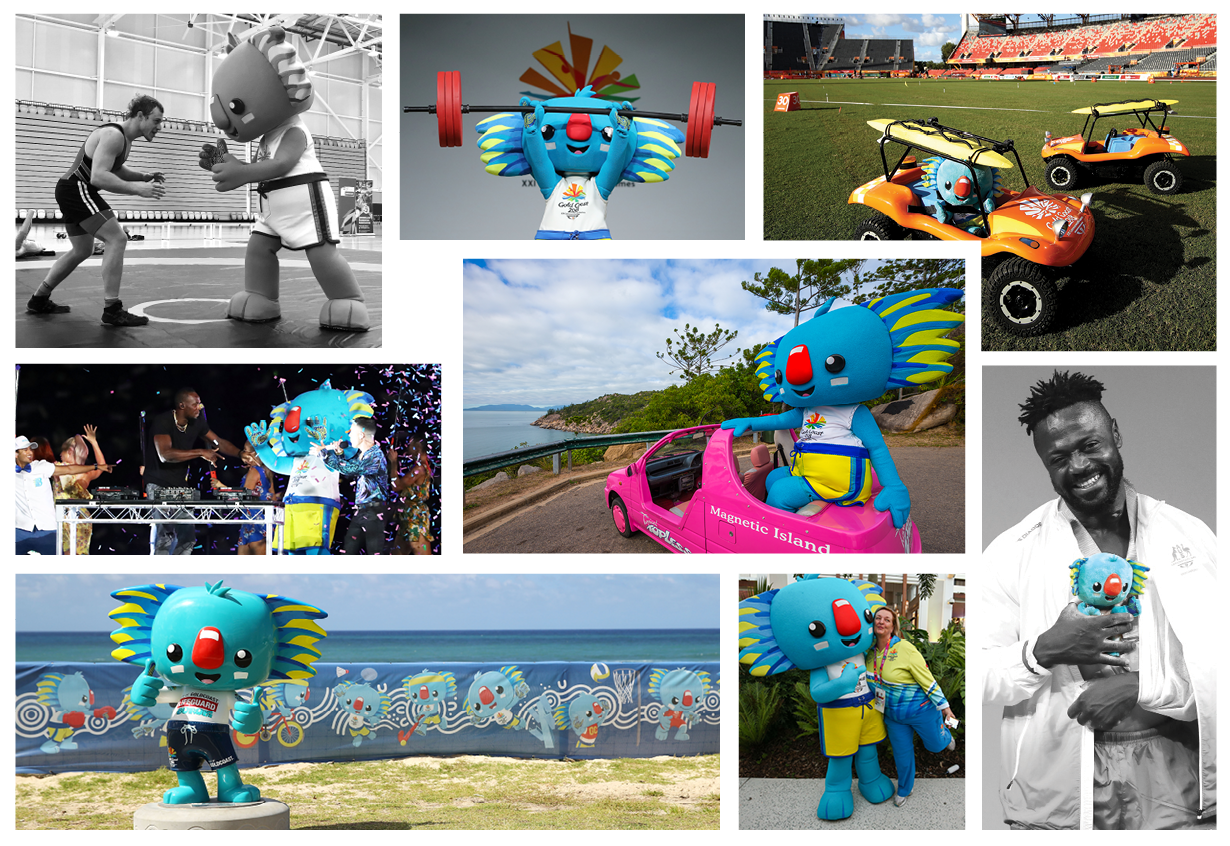 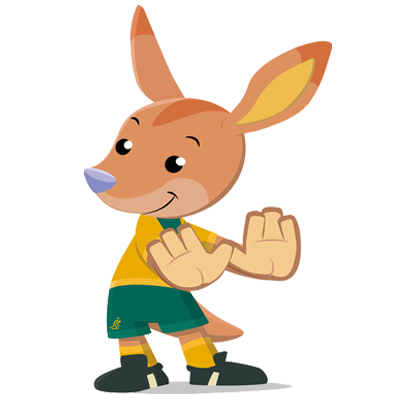 When Rugby Australia (RA) decided to give their current mascot Wally a more contemporary approach, they contacted Tribus345. It was important to maintain the essence of the original Wally but RA wanted him to have a real personality, a story and a history. It had to reflect Rugby Australia’s proud heritage and embrace their values.

Wally The Wallaby 2.0 is a very special character, with a number of unique features and personality traits that combine to bring him to life and connect with fans, players, sponsors and public alike. Wally’s appearance reflects his personality. His cheeky smirk and engaging eyes capture the imagination of the public.

While creating the backstory, it was important to factor in both logistical requirements for the suit manufacture and characteristics that could be used by the marketing and merchandise teams for RA. Wally has a roguish faux-hawk hair line that hints at his larrikin and playful manner. His signature ‘W’ hand salute (The Wally) unites Australian rugby fans and compliments his cheeky and socially energetic personality.

When Wally is leading the chant ‘Go Wallabies” at a live match of Rugby, he places his two paws together to form the letter W.

“The work Tribus345 did on injecting new life and personality into Wally has been great. He now has a story and a history, and it’s a story that reflects the proud history of Rugby Australia, and importantly embraces all our values and helps educate our fans and the community,”
Adam Freier, Head of Marketing & Digital for Rugby Australia. 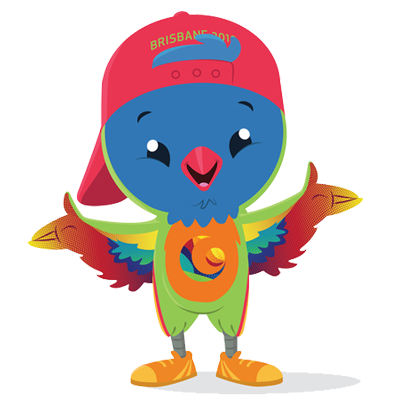 The INAS Global Games 2019 (GG2019) is a world-class sporting competition for athletes with an intellectual impairment. More than 1000 athletes from over 80 countries will compete for the honour of being recognised as the best in their field.

The organisers wanted a mascot that would connect with fans of all ages and spread the word of inclusion for all, regardless of any perceived differences, and championed the message that being different is not a barrier but a gateway to new possibilities.

We created Lorri, a cheeky lorikeet that had her own point of difference. Lorri has a distinct pattern inside her wings that is different to the usual lorikeet. It is based on the subgraphics for GG2019, and whenever Lorri greets her friends, athletes, fans and public, she opens her wings wide and shows of her vibrant wing pattern.

It is a gesture that shows she embraces her difference and individuality and that the world is a colourful place when your community has variety. Lorri is also very cool and connects with the kids. She is often wearing oversize headphones, a cap on backwards and has colourful sneakers.

“The work Tribus345 did on creating our mascot, Lorri was exceptional. The story they created and the personality they gave to Lorri was perfect to promote the ideals and values of the Global Games and the athletes we represent. Lorri will fly the flag for inclusion for all and celebrate diversity in our community and the fact that every person can be successful in sport and life.”
Robyn Smith, CEO of the INAS Global Games. 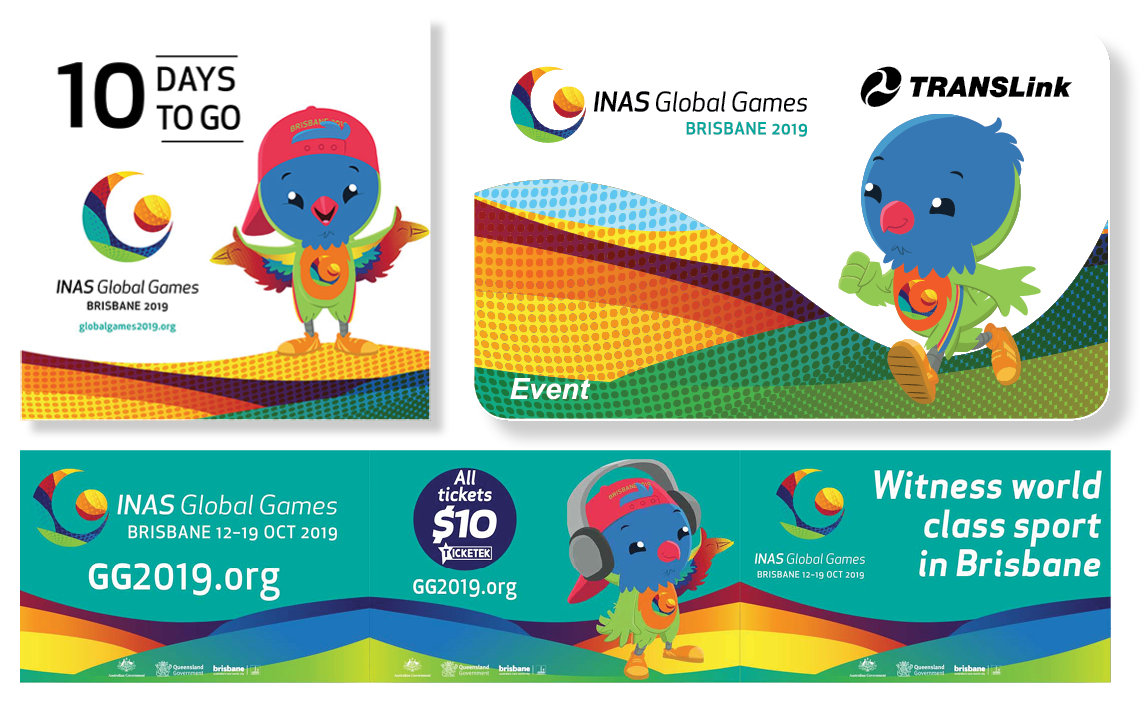